As explained in the previous account, to be in Gandhi’s ashram for me, was overwhelming. I’ve been inspired by Gandhi  since I saw the Attenborough film on Gandhi around 1999.  I had a feeling back then that he had a message for the world and I found myself in deep resonance with his spirit.  I had dreamed him come to me and it was very simple.  He simply was on the long march, it was dark all around, he had no eyes only rims of round glasses.  I felt myself lower than my feet (humble) and he was walking then stopped, he looked at me and I felt acknowledged.  For years with my work in peace and nonviolence education, I felt his presence and often repeated the words ‘to be the change’, in spirit, this was his message. 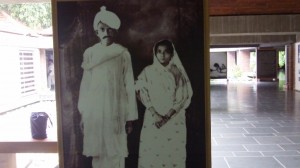 Gandhi Museum at the Ashram

So to be at this ashram was like coming home.  I walked around to absorb the feeling and to walk in his shoes for a moment.   I reflected how I came to India and my deeper feeling was to come here.  I had originally planned to go to Porbandar, but it seems that the ashram was the place.  I walked into the library and saw all the books on him.  I could feel the tears welling up in inspiration.  I felt his presence strongly.  I turned my face so no-one could see me cry, they wouldn’t understand.  This happens to me a lot, I am used to it, it is such a deep feeling.    I then sat down and read some of the material.  I eventually spoke to staff and told them my story and my love of Gandhi. As I was speaking inspiration came again and I started crying again.  This time I couldn’t hide it.  But one of the women, I’d say she is a gandhian could see I was genuine.    She decided to show me around and took me to the garden where they pray twice a day and the 100 year old tree that was alive when he was.  She then showed me his living quarters , there was an elderly gentleman spinning cotton.   To see the spinning wheel filled me with joy as it was the symbol of independence.   They gave me a try at spinning, it was quite difficult and an artform.  Then we walked to his room, she pulled out the keys and let me into his private space which still has his things there.  I felt I was being priviledged.  We sat on Gandhis mat and I told her of my REAL HOPE program and how I teach truth.  We sat there next to his spinning wheel and then she showed me his staff, I remembered my dream.   I was filled with a sense of connectedness to him.  After I left the room I thought of the prison cells he had been put in, as he lived simply they would have been other places to meditate on god or truth.

We moved from there back onto the landing where the other spinning wheel was and children emerged.  I took photo’s of them as I have a particular love of children.  I watched the Gandhian teach them of his life and then they sang a prayer together, it was beautiful to watch.    I then signed the book writing about truth and love in a poem.  I felt at peace in a likeminded community.

I then wandered around the Ashram feeling peacefull.  A couple came and we talked in a broken way, but understood each other.  The Ashram is on the river Sabarmati (ashram is called Sabarmati Ashram).  I wonder about a world truly adopting his principles and practices.  Truth is so manipulated as influence seems more important than integrity these days.  The all mighty dollar/rupee/whatever is what transfixes people.  They forget that the greatest wealth is virtue.  To love yourself enables you to truly love others.  What we give is the greatest national security instead we try and take more from others, self gratification is confused with self fulfillment, this is pure joy in living.  I know this feeling.

“Each one has to find his peace from within. And peace to be real must be unaffected by outside circumstances.”

Random video from the Gallery

Children are the future