I arrived in London and stayed with my friends Jo and Phil. I am staying in Merton Abbey Mills in South of London. I have had a wonderful time here catching up on calls to Australia and getting some well earned rest after Athens.

I ventured in the City with my friend Jo. To my surprise as we were sitting on the underground a person says ‘susan is that you’, to my surprise i saw my friend Kayte from Australia, she is an activist and told me she was heading to Scotland for the climate camp. she invited me to come along as a clown. I said ‘let’s get in touch and talk further’. I was so surprised to actually meet someone i knew as soon as i got on the train.

Jo and I parted and then agreed to meet up after her interview. We went to a café. I was chatting over the counter to the shop attendant trying to find out the country he was from, he was reluctant to tell me. I told him I am a universal person and then a person standing next to me pipes in and says she is universal as well in a nice crisp British person. I ask her to join us for lunch humorously, and we have a discussion. I told her I am a clown and she confesses she also loved clowns as a child and wanted to be one. She was a spiritual/religious person but with shining eyes, I could see she was genuine. She also had her art sketch pad there and was practicing for some teaching she was going to do. I invited her to come clowning with me the next day in London.

The next day she came along to my house and I lent her my Indian clown suit, given her background was Indian seemed appropriate. She looked fantastic with the paint. I took her out to a patch of grass and gave her some tuition on clowning in public. We then set off. I bantered with this guy on a bike, playfully asked if I could hitch a lift. He then spoke hindi to my new friend. Turns out he wants to be a clown. So we go back to the house and my friend Jo wants to come. So I dress this guy up (after a shower phew). He happily where’s my thai clown hat and colourful pants, looks great. I give him tips on clowning as well. 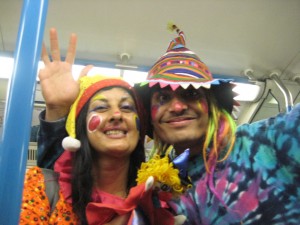 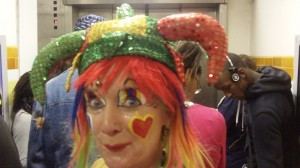 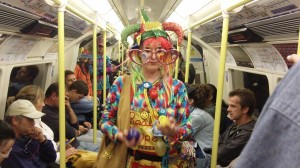 We then head to the Underground. The first picture I see down there is a giant picture of Gandhi – seemed appropriate given my interest in nonviolence and to be the change. I then go about clowning on the platform, blowing bubbles, having little chats with people and then we jump on the tube. My friend Jo becomes the camera person and also observes reactions. Some try and hide in their books, others are smiling. On one carriage a dark skinned guy (don’t like the term black, given I am pink not white hmmm), anyway he says ‘shut up clowns’, I jokingly say sorry and we play a little, I am mindful not to upset anyone, particularly in a confined place, so sensitively I clown and I manage to make eye contact with this guy and get a smile out of him. I love that when that happens, his mask comes down. 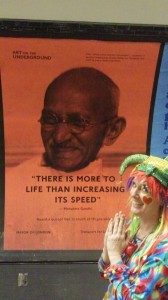 We clowned with children, hugged people on the platform, bantered, juggled, threw balls around and included others, and when asked if we wanted a donation, I said give it to someone that needs it. Funnily enough the guy said ‘I need it’. I laughed. We then went to Covent Garden and clowned around and I got to have a game of table tennis with a kid, I chased him around the table and made out when playing I was a Chinese expert table tennis player, or indeed a Wimbledon tennis expert. I had a lot of fun playing. I also saw a great juggler and gave him a hug, but I noticed he didn’t project the love. He was doing it for money. We do it for love and connection and for free. I don’t take money for something I love and I am leading by example.

We are more than we think

I chatted with a Palestinian guy about the middle east and the importance of getting Palestinian and Israeli children together to learn peace and to lead the adults who are caught up in religious and intractable belief systems that never are questioned internally. This is the nature of religion but the one thing they all miss is that god is love. How does that translate into violence, someone isn’t getting the message of our true spirit. Politics gets woven in and power encompassed within mostly male mindsets that don’t appear to have the ability to work on the relationships rather than constantly positioning for advantage or negotiation. Real peace treaties are looking beneath the conflict into what is really driving it. Unfortunately there are many faces unseen behind the scenes with an interest in conflict. If only they could see how many lives they make unhappy through selfish intent. So I sat with this guy, turns out he is a musician and did invite me to Soho to hear him play, unfortunately I had a dinner to attend and I felt I couldn’t leave. But we had a good discussion nonetheless. 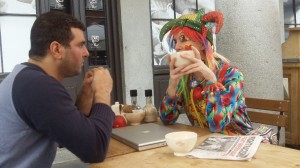 We went for a hot potato and walked to a church yard. I met this Irish guy there. I told him I was coming to Ireland and he said to make contact. He was interested in peace himself. So we exchanged numbers. Ahhh the beauty of being a clown, you meet all shapes and sizes.

We went home and debriefed about the day. My two new recruits loved it and really enjoyed the interaction. My friend felt I should start clown groups and get more people into it, but it is not really possible given I am traveling, but it is a nice idea. The more people explore clowning the more they see the reality of how beautiful people are that they are mostly trapped in constrictive patterns and feel a deep isolation from their community.

I am enjoying London, and it brings back many old memories as I used to live and work here. It is a beautiful city but always in the back of my mind is the reality of the environment and the importance of change, but like the solid structures, constantly maintained, we keep alive the edifice of our own social constructs and maintain the façade that all is ok. In truth the structures are faltering and the environment is under enormous pressure. We cannot continue like this, yet the change must come from within us, it is not coming on a white horse. It comes from facing the truth.

Seeing Gandhi’s enlarged picture in the Underground was a great sign, perhaps Al Gore can feel some relief there are some signs out there that are not reinforcing the myth of consumerism, the real sign is ‘be the change you wish to see in the world’. To thyself be true, this means to lift ones head out of the video game, from the television, from the paper work and sit and reflect. Is this the life I want, am I truly happy or do I keep feeling I must run on fear to be safe. The answer is our greatest security comes from within and taking responsibility for the world we created, to look for a new world that is sustainable and happy. That is my vision. I do not doubt it is possible, if the alterative is possible so is a positive future. We have to get that, turn off TV and face reality.

Scotland tomorrow and figuring out how to get to the Orkney islands. This is a sacred site older than the pyramids, should be interesting….

“God has no religion”

Random video from the Gallery